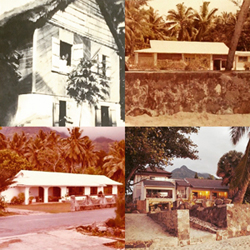 The Sables d'Or Luxury Apartments sit on an historical site. Having been built on the site of the old home of one of the foremost families in the islands, the L’Efevre’s who once owned all of Beau Vallon Beach and most the mountain range called Trois Freres behind it. Trois Freres, clad in emerald green rain forest, makes a spectacular backdrop to Sables d’Or.

The last of the L’Efevre’s to live in the house was Vicky L’Efevre Lanza who was born there and went on to raise her own family there. Vicky then  had the foresight to see what a beautiful building could rise from her birthplace. A well-known local personality, she oversaw the transformation and is now managing the apartments alongside her daughter Veronique.

Her delight and warmth in showing people her stunning islands began then and continues to this day which makes her new job, running Sables d’Or Luxury Apartments ideal. She is enthusiastic about doing what she enjoys most, which is being with people and sharing her ‘joie de vivre’.

Actually she has always been involved in the travel business in one way or another. She joined BOAC / British Airways in 1972 and spent 35 years working for the airline. She was Manager in Seychelles and then transferred to Mauritius as Commercial Manager for the Indian Ocean.

The self-catering apartments are each named after a local fruit that was grown on trees planted by Vicky’s father or late husband on the property. 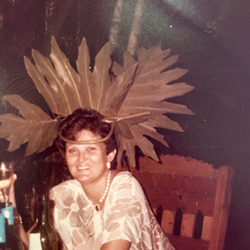 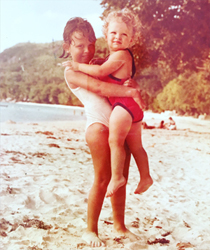 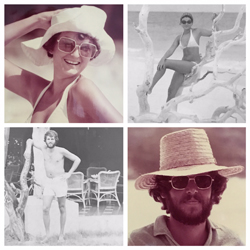 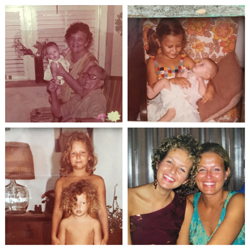 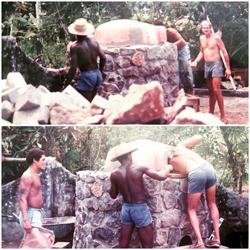 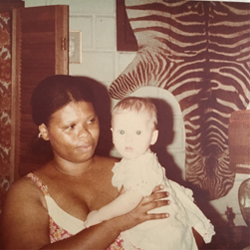 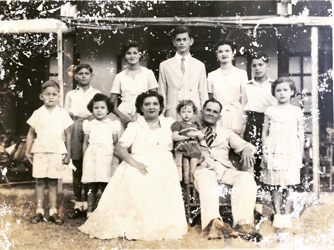 Edouard and Ena Sullivan L’Efevre had 14 children, 7 boys and 7 girls.

Pere L”Efevre supported his family by working the land and farming, he had acres of land in St Louis, La Pointe and Trois Freres.  He produced together with his workers the following; Tobacco, Patchouli, coconuts and 'toddy calou” derived from sapping the young coconuts, and  the best ‘Bacca” from sugar cane (canne pouriss), so delicious that he was nicknamed ‘Tiboule Bacca. Workers from far South will flock to the plantation house to buy his famous Bacca!

On the farm at La Pointe,  where the workers each had their little cottage, they grew various vegetables and fruits.  We also had pigs, cows from which fresh milk was obtained daily and shared with all the workers.  Chickens and ducks  were seen all around the garden and my poor Maman complained of never being able to grow a proper  rose and flower garden.

Le Jardin by the house, with its little flow of fresh water and pond, had all the spices we would need as well as local pumpkins and bringelles, and a variety of local fruits, orange mozambique, jamalalque, pomme locales, golden apples etc.   A vast breadfruit tree gave much shade to the Plantation House at St Louis, fruits a pain was a main local dish.   It is said should one ever eat our local breadfruit, you are bound to return...today we have a tree bearing fruit right behind Sables  dOr.  Other local 'gros manze! cultivated was  cambave, cassava and manioc.  In other words we were self sufficient in so many ways.  Life in those days was simple but hard and my father was of a very strong character  and persevered to provide for his big family.  Sadly he died at the age of 76 of an heart attack just when he was trying to retire and had moved to Beau Vallon to be near us and  his first granddaughter, Vanessa born  in Seychelles, she gave him the joy he had often missed with his own children working so hard.

Maman, was the homemaker, resilient and very much devoted to her family, married at 16 years old and bearing so many children gave her strength and a determination to see all her offsprings educated at the Regina Mundi and Seychelles College, learn to  be social and stand up for themselves and aim quite high. 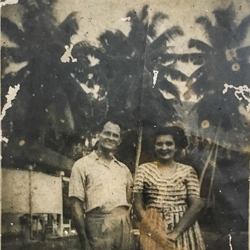 We had a very strong Catholic upbringing. Ena Sullivan had lost her father at a very tender age sadly. she was one of 9 children, born to Georges and Josephine Sullivan. My grandfather died leaving my grandmother pregnant with her 9th child.  They owned the adjacent  property next to Heirs L’Efevre in St Louis, now called Pascale Village.

So it was normal, that handsome Edouard, first born of Henri and Mary Cecilia L’Efevre,  sent his letter ‘demande de marriage’ for the beautiful Ena, not  choosing the first daughter as it had been expected in those days but to the one who had character and was  more beautiful, he was 15 years her senior.  His estate once a big chunk of St Louis and Le Niol area…is now better known as the new ‘Botanica Development’, where the old historical house stands, near the St Louis Chapel….land that was donated by my parents to the Roman Catholic Church for our local Chapel of Notre Dame.

Together they built their family and new Plantation home at St Louis, and as each child finished school, a piece of property was sold  off to send them overseas to study and find their future. Today,  nine of the children still live overseas and Vicky is the only ‘baba’ still home… a place she has cherished and dedicated to her hard working loving parents.

My mother loved her Beau Vallon. She died sadden that her beautiful hard earned property was ‘acquired” by the Government after the coup d'etat and eventually sold to foreigners, a sad chapter in the history of our family.

Today, what you see is really what is left of a beautiful beach property, that once stretched from La Perle Noire  Restaurant (called House No 1 and Tropicana in the past) to La Plage Restaurant ( in the past called Seacrest and run by the eldest son Philippe)  Thankfully his heirs still have control of that property at that end. Mamman Cherie was charmed by the beach of Beau Vallon, which she could see from the windows of her bedroom at St Louis giving her a full view of Silhouette and North  islands.  She would visit her cousins the Delorie/Sullivan (ex Fishermans Cove /H HOTEL properties) and was keen to also move the family to Beau Vallon for the school holidays even if St Louis was only close by up the hill.  She had a vision...

When she heard that a piece of lovely beach front was coming up for sale, she was eager to have it but my father said we could not afford it, not with all the mouths to feed. But he had not counted on his entrepreneurial wife Ena, who whilst sewing all the children’s clothes was also doing much "‘Crochet" (needlework of tablecloths/napkins/’assortment of small delicate handwork for tables and plates) to sell.  She had also been privately saving hard for her dream and family. She had collected all his loose change every day from his pockets and stored it for a rainy day in a ‘la malle’.  (medium  size wooden chest) under their bed!!   Most families had those at the time as there were really no banks in Seychelles.  The women of the older generation, mothers and housekeepers were the backbone of the island’s society having learned to be self reliant.

So to his surprise, she had the necessary funds to help buy the property.  I always cry when my mother tells the story so proudly how the young maid ‘Alice’ who usually carried the ‘la malle' to town to deliver the crochet work to sell with her…complained on that fateful day in 1950 how heavy the ‘la malle’ was today!!!   Unbeknown to her…she was carrying her Madame’s treasure!

So Beau Vallon became our inheritance and how proud they were, for Mere L’Efevre, her Beau Vallon was her utmost sacrifice and gold.  It had an old ward (ex war time) on it that they slowly converted into a small hotel with little chalets and rented it out on lease to a Mr Gerry Legrand. (At that time for Rs500 per month!!). Then on the other half, my father built around 15 little cottages, he would rent one, get enough funds to build the next one etc. The three loveliest homes were ‘Penrose and Dauban House’ right alongside the Hotel des Seychelles and our own 'Grande house’ where Sables d’Or now stands.

As children we so enjoyed coming to Beau Vallon and meeting all the expatriates staying at the hotel and our local friends on weekends. The beach was ours as it was very deserted in those days except for a few neighboring families and the fishermen with their long black pirogues bringing in mackerel and sardines. Life was a bliss in paradise indeed.

In  August 1972, Vicky, (the 13th child)  was married there to her American husband, Van Lanza from Sagamore, Mass, USA who was working at the USAF Tracking Station at La Misere.  They lived in the ‘old house’ until 1980 when the house was modernized and renovated.   Their daughters, Vanessa and Veronique were both born in the ‘old beach” rustic house. After her husband’s death to lung cancer in 2007.  She realised the ’tourism concept’ that they had designed and agreed together and Sables D'or opened its doors in 2013. Van’s  ‘Pizzavan" Pizzeria still stands untouched in memory of this ‘local American’ who spent 36 years of his life on his dedicated island home. The beautiful palms standing strong are his contribution to our ‘Sables d’Or’ of today.

The site where now stands the apartments of Sables d'Or has had 3 previous buildings on the site and a been place of love and happiness.  Over the years, the ‘homes’ have witnessed weddings -  Sister Christine, Vicky  and the civil ceremony of eldest daughter,  Vanessa as well as wonderful celebrations of birthdays, parties and christenings / Confirmation of both my loving daughters.  This was the place the overseas family will always gather once a year in February to celebrate the birthday of our Patriarch and Matriarch L’Efevre. Today the beautiful beach garden, dedicated in their memory is a tribute to their hard work,  dedication and  values /principles that  they strongly embraced in their children and grandchildren  and great grandchildren...it must be a place forever kept in our family for generations to come